At Glenside Hospital Museum we have artifacts from the period including two Thomas Splints and thee stretchers. There is also a collection of photographs and postcards showing soldiers in wards, in the grounds, posing with friends and medical staff, individual portraits, summer fetes, plays, musicals. Immediately one wants to know, who they were, what had happened to them, and where they came from. We are currently researching and collecting individual stories to shed light on what it must have been like. If you have a story please get in touch. 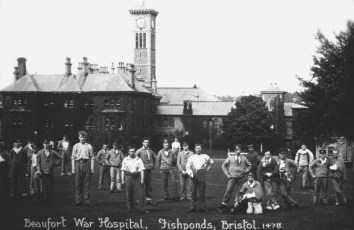 In 1915 when the other Bristol hospitals could not cope with the increasing influx of casualties, Bristol Lunatic Asylum (Glenside Hospital) was converted at War Office expense into a military hospital with 1,460 beds ‘for the general medical and surgical treatment of sick and wounded soldiers.’

‘The total number of sick and wounded received in Bristol to date amounted to 6,247 cases, and including transfers to subsidiary hospitals. &c., no fewer than 11,046 wounded soldiers had been handled.’

Forty-five male patients remained to work on the grounds, in the hospital departments and shops. The remaining 931 patients were sent to other asylums in the West, including Dorset, Wilts, the Somerset asylums at Wells and Cotford, Devon, Exeter, Plymouth, and Cornwall. The female mentally trained nurses who had no general nurse training served as auxiliary nurses. The male mentally trained attendants who had not been called up for military service were retained as orderlies. They were joined by other men, including the artist Stanley Spencer who spent a year as an orderly at the Hospital and later depicted scenes of life there in many of the panels at Sandham Memorial Chapel in Hampshire. Stanley Spencer wrote in July 1915:

‘I had to scrub out the Asylum Church. It was a splendid test of my feelings about this war. But I still feel the necessity of this war, and I have seen some sights, but not what one might expect. The lunatics are good workers and one persists in saluting us and always with the wrong hand. Another one thinks he is an electric battery… ‘

Dr. J.V. Blachford, Medical Super­intendent of the asylum, was appointed Lieut.-Colonel, Commanding Officer. The nursing staff, all female were brought in. Miss A. C. Gibson as Matron and the War Office supplied sisters and nurses from Queen Alexandra’s Imperial Military Nursing Staff Reserve. By 1916, the trained nursing staff had been so depleted by drafts being sent overseas that members of Voluntary Aid Detachments(V.A.D.) were brought in. These women trained in preliminary first aid and nursing skills were as a group very much defined by being middle or upper middle-class young women, three quarters of whom had never had any paid employment. They were fondly nicknamed ‘Very Adorable Darlings’. The Female Infirmary block at the workhouse situated next to the asylum, was cleared and lent as a home for the sisters and nurses.

The day rooms and the twenty-four night wards became medical and surgical wards. Corridors were refurbished to cope with emergency admissions, and two operating theatres were constructed of corrugated iron lined with patent plaster. In addition, the Duke of Beaufort consented to his name being given to the hospital. The greatest number of patients sleeping under the roof of the Beaufort War Hospital on one night was 1,487. In the summer of 1916, Beaufort War Hospital became an Orthopaedic Centre for the district. Five hundred beds, including twenty for officers, were allotted for the orthopaedic cases. Men from distant parts of the world came to study the methods. Captain Moore from New Zealand and Captain Wace from British Columbia joined the staff, and soon a constant stream of American surgeons passed through the centre at Bristol to learn the work before joining up for service overseas or being put in charge of similar hospitals in America. Sometimes as many as six were working there at once.

Thirty beds were reserved for mental cases among local troops; and in 1917 a ward of ten beds was established for cases of sickness among the German prisoners of war in the labour camps near Bristol. The first convoy of wounded was received on May 24th 1915 and the Military Hospital closed in February 1919.  Over the four years,

29,433 patients were admitted and 164 deaths recorded, of which 30 were civilian emergencies from the influenza epidemic of 1918. The authorities tried to send men needing treatment as near to their own homes as possible, so many of the soldiers would have been local, however their was also a huge contingent of Australians and Canadians. You can see the Australian hat in many of the photographs of soldiers at the Hospital. The sick and wounded soldiers would arrive by ship into Avonmouth and then travel by train to Bristol Temple Meads, often arriving in the dark in order not to reduce morale in the general population.

‘We arrived at Bristol Station about 2 a.m. on Whit Monday a sore, tired lot, after many weary hours on train and boat. We thought we were going to London, but many of us seemed so ‘fed up’ that we didn’t care much where we were going. We certainly didn’t expect any fuss to be made of us at that hour of the morning, so you can imagine our glad surprise to see a bright array of Red Cross sisters and smart looking Ambulance Corps.’ ‘The cheery, animated scene, with the red and white of the sisters and the dark blue and silver of the ambulance men, looked picturesque, spectacular — like a theatre scene.’ ‘Before you could wink twice we were putting ourselves outside of tea and cake to our heart’s content.’ ‘While some served the good things, others gave us postcards — wrote them for us and arranged to post them for us — and one dear, thoughtful, motherly lady gave us luxury of luxuries!, a nice pocket handkerchief each. And then there were the cigarettes.’ ‘The splendid handling of the large number of stretcher cases was a sight good to see.’ Once they arrive at the Hospital, they were washed, treated and put to bed.

‘My wounds were redressed, and washed. I was made comfortable for the night after the doctor had been round. I had a fairly good night’s sleep. Sunday morning came and nurses fused around and I had breakfast. I could spot Tommies walking around the ward. I beckoned one over. I asked him the name of the hospital. He replied ‘Beaufort War Hospital, Stapleton’. I told him my home was only a mile away and could he get a message to my wife. He walked all the way that Sunday, in his hospital blues.’

George Pine’s memoirs published in ‘From Trenches to Trams’, by Clive Burlton.

Although all the photographs are black and white, you can see some of the soldiers are wearing special blue flannel uniforms. The ‘convalescent blues’ was a means of establishing and maintaining cleanliness in military hospitals, where soldiers usually arrived in dirty, worn-out and infested uniforms and ‘great coats’ that required sterilization and thorough disinfection. It also distinguished them as wounded soldiers if they went into town. The lounge-jacket and trousers resembled ill-fitting pyjamas, available in a handful of sizes so that it would fit all. The convalescent blue outfit therefore fitted poorly, requiring soldiers to ‘flap’ or ‘cuff’ their trouser legs and shirt sleeves. The entire ensemble included a red four-in-hand necktie. Officers were exempted from wearing the ‘Blues’, providing them instead with armbands decorated with a red King’s Crown, a personal clothing allowance, or for some silk pyjamas donated by the public and voluntary-aid agencies. In 1919, the army left Beaufort and everything returned to normal, employing the same staff less the seven who had been killed in active service. Their memorial is in the church, which houses the Museum.  The same patients returned from Gloucester, Somerset and Devon. From Cornwall they returned in three groups, the first seen off by the visitors at 10am 7th December 1919 ‘well dressed  and well clad for the journey.’ Further groups departed on October 1st 1920 and October 13th 1920.  The first new patient was admitted on December 18th 1919. We are currently researching this aspect of the hospital’s history with an Esmee Fairbairn Collections Fund grant: