Poor mental health can strike at any time. In Victorian Britain it could be caused by a skin disease or as now old age. While photographs capture a very short period of time and the sitter could look very different a few seconds later, both these photographs record the patient and their condition. 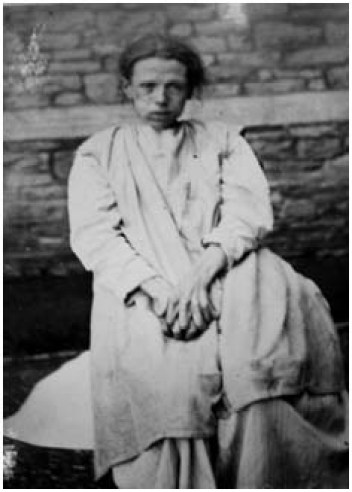 The first picture is of Harriett Abbott, a 35-year-old servant who was admitted to the asylum in 1893. She was suffering from erysipelas, a painful skin condition, now easily treated with antibiotics. In the nineteenth century it could be deadly, spreading to the brain and other organs. Among those who died from it was the great philosopher John Stuart Mill.

(For a history of this disease see ‘Ways to Die: Erysipelas,’ http://biomedicalephemera.tumblr.com/post/7775087538/ways-to-die-erysipelas.)

Harriett died of her condition just seven weeks after her admission. She was said to be suffering from melancholia but this was surely a consequence of her physical condition.

The photograph is unusual in that the photographer has included her hands and her face. Many of the photographs are just portraits. Although her face is not quite in focus, some blemishes due to her skin condition can be seen. Her hands are entwined and rigid. She will have been in a lot of pain. 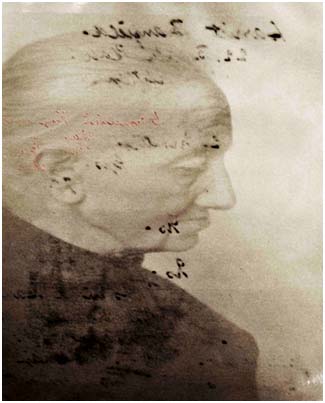 The second image is of Harriet Bamfield who was 70 years old when admitted to the asylum in 1897, where she resided until her death 11 years later.

She is in profile and is looking downwards with a somewhat mournful expression. The image is rather ghostly which emphasises the impression of an elderly lady near the end of her life. This, however, is misleading as she lived for another 11 years.

When restoring the image I have not removed the writing which has partially seeped through from another page of the case notes. This would not have been on the original, but the writing to me seems to say something about the effect of the institution on the woman: that the bureaucracy is pressing down on her and leaving its mark. Thus the photograph could be viewed not as a comment on the subject but as an evocation of the effect the institution may have had on patients like her. This view is subjective and contentious but images can have multiple meanings and uses.