Dr Peter Carpenter,  treasurer and volunteer at Glenside Hospital Museum has found this portrait in the Wellcome Collection online and researched the mystery of Louisa a notorious  ‘Madhouse’ resident from the late 1700s.

The mysterious Lady of the Haystack

Why was Louisa admitted in 1781 to the lunatic ward of St Peters Hospital? 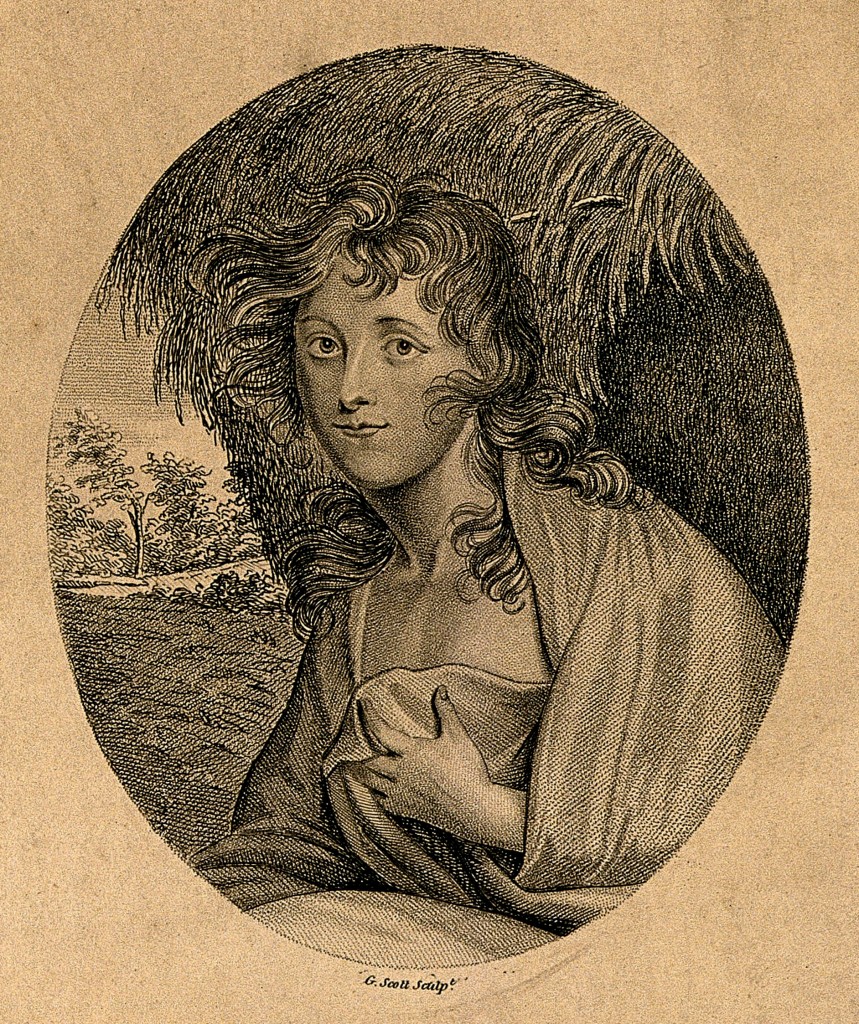 Louisa had lived for nine years under a haystack:

‘at Bourton, a small town near Bristol. None knew whence she came and her appearance puzzled everyone. She lived on hedge fruits, &c. She shunned the sight of men; but was not so shy of women, and from these she received milk and tea, her only additional diet.

All superfluous clothing she refused or neglected; nor could she be persuaded to live in any house. Everyone loved and watched her, and guarded from every intruder the field of her repose. None knew her.’

She fascinated people so much that many stories were printed. This made her

‘more notorious. She was harassed with questions, and answered only be indifferent. Her accent is foreign. She has been addressed in high and low Dutch, Danish, French, Portuguese, &c. She has even been adjured by foreign priests of different denominations, to discover herself under seal of confession – all was in vain! Several who had lost children came to her, but left her unowned. Conjecture was multiplied and a nobleman was deputed from Court but this enquiry also proved fruitless. At first she was supposed to have been a lady who had made a late sudden flight from Bath in great distress. Others for a time was certain that she was the Queen of Denmark. It was so positively said that she was the daughter of a certain German Baron, that a correspondence took place, wherein she was at last denied.’

Why was she captured in print?

The portrait of her was engraved from the picture painted from the life by Mr William Palmer, of the Royal Academy, London, by G Scott in 1805 and is in the Wellcome Collection. The purpose was to see if the print would help people identify who she really was.  She was a mystery and subject of a book in French in 1785 which was translated into English as Louisa: a Narrative of the Facts. This ran to three editions and is still freely available online.

In 1781, her health deteriorated and in December it was deemed necessary to remove her from her haystack and she was taken to St Peter’s Hospital as the illness had reduced her ‘ almost to idiotism’.  She did then escape back to her haystack in Flax Bourton.

Then to the ‘Madhouse’

People however were still concerned and Hannah More intervened, paying for her to be moved to one of the first Madhouses in Bristol, based in Hanham on the upper Bath Road – set up by the energetic Wesleyan preacher Richard Henderson. This was considered to be ‘a most respectable house of reception for insane persons’.

‘In the afternoon I called at Mr. Henderson’s, at Hanham, and spent some time with poor, disconsolate Louisa. Such a sight, in the space of fourteen years, I never saw before! Pale and wan, worn with sorrow, beaten with wind and rain, having been so long exposed to all weathers, with her hair rough and frizzled, and only a blanket wrapped round her, native beauty gleamed through all.

Her features were small and finely turned; her eyes had a peculiar sweetness; her arms and fingers were delicately shaped, and her voice soft and agreeable. But her understanding was in ruins. She appeared partly insane, partly silly and childish. She would answer no question concerning herself, only that her name was Louisa. She seemed to take no notice of any person or thing, and seldom spoke above a word or two at a time. Mr. Henderson has restored her health, and she loves him much. She is in a small room by herself, and wants nothing that is proper for her….’

‘I spent a few melancholy minutes at Mr. Henderson’s with the lost Louisa. She is now in a far more deplorable case than ever. She used to be mild, though silly: but now she is quite furious. I doubt the poor machine cannot be repaired in this life.’

Many of the first madhouse proprietors in England were clerics as was Richard Henderson.  John Wesley found Henderson

‘has a peculiar art of governing his patients; not by fear, but by love. The consequence is, many of them speedily recover, and love him ever after’.

Henderson died in 1792 and presumably it is after this that Louisa was moved as incurable to Guys Hospital in London still funded by Hannah More. She died at Guys Hospital on 19th December 1800.

Was Louisa a woman from Bordeaux, or a traumatised German gentlewoman?  A person with a severe head injury? An abandoned person with learning difficulties? Someone with a physical disease that affected her mentally?  Someone with autism?  We will never know but she has been the source of a lot of speculation even now.  See http://www.historicalblindness.com/blogandpodcast//blind-spot-the-lady-of-the-haystack