Gave many- a soldier a helping hand!

The Red Cross logo that we are so familiar with today, is the same design that has been seen since early 1900s. This white cotton armband was worn to signify neutrality, protection, and caring for the sick in times of war.

During the first World War, the armband was worn by the members of the Red Cross and the Order of Saints John, who were organised into Voluntary Aid Detachments (VADs). The British Red Cross was extremely important to the war effort and was funded by donations.

The Red Cross provided an enormous amount of support to soldiers at the front and the returning wounded. They prepared important basic materials such as: clothing, bandages and splints as well as providing ambulances and nurses. Bristol Red Cross nurses were amongst those who welcomed the wounded as they arrived at Bristol Temple Meads; offering nice hot cups of tea, a packet of cigarettes, and a postcard to send home.

Women in The Red Cross: Agatha Christie volunteered before publishing her first novel in 1920.

Women played an important part in the Red Cross with 90,000 serving as VADs at home and abroad.  County branches of volunteers called Voluntary Aid Detachments sometimes known as Very Adorable Darlings were trained in First Aid and what was called Home Care. Sometimes they were local women, the wives of farmers or soldiers.

At the beginning of the war the VADs worked at auxiliary hospitals where the atmosphere was relaxed and encouraged recovery. However, by 1915 the need for nurses was so great that VADs worked alongside trained nurses from the Queen Alexandra’s Imperial Military Nursing Service. 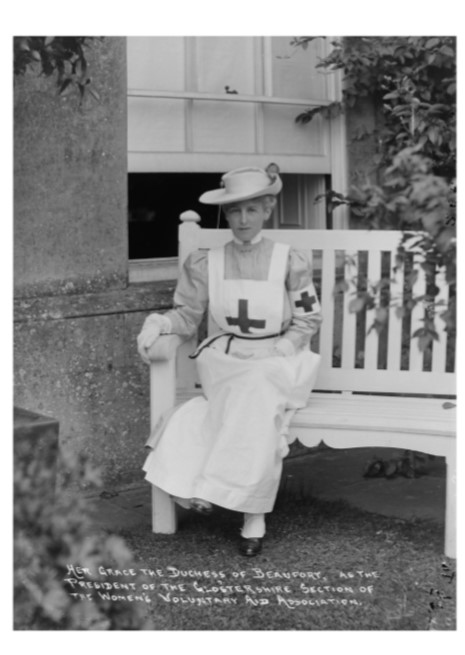 Those who enlisted as orderlies were often men who had been rejected by the Army as physically unfit. But they were still fit for hospital work, so they enlisted in the RAMC. The artist Stanley Spencer worked at Beaufort War Hospital as an orderly for ten months during 1915 and 1916, alongside his brother.

Spencer’s wonderful paintings show his everyday life as an orderly at the Hospital. They can be seen at The Sandham Memorial Chapel, Burghclere and in his diaries.

National Lottery Heritage Fund have supporting us to produce an activity learning package for schools and other organisations to hire, using our handling collection which includes Monkey Brand Soap, the Red Cross Arm Band, Brodie Helmet and the Hot Water Bottle.