Whether the local press reflects public opinion in the late 1800s it is difficult to know because there are rarely any other sources, but they do give an insight into attitudes to mental health care.

Bristol had produced many newspapers since the Bristol Post Boy was first published in 1702. When Bristol’s asylum opened in 1861, there were six weekly papers in Bristol and the Western Daily Press which, as its title suggests was daily and covered the whole of the west country. Politically the press was equally split between those supporting the Conservatives and Liberals. The main source of information about the asylum is from the Liberal Bristol Mercury.

Before the asylum was built Bristol’s elite including members of parliament, and the chamber of commerce were all against the proposal to build a new purpose-built asylum, despite the Mental Health Act of 1845 stipulating every county need to have a safe place for the mentally ill. It was expensive and many cheaper alternatives were continually suggested.

Many articles and letters in the local press rallied against the proposal. The Bristol Mercury, April 7, 1855, carried a report from a physician at St Peters who suggested that the costs outweighed the benefits because only one in ten were likely to be cured. (The actual cure rate it transpired was between 40 and 50%.)  Bristol Mercury, October 29, 1853, claimed it would add 8d in the pound to the local rates.

Once the asylum had opened the attitude of the press changed dramatically. The following passage from the Bristol Mercury 1864 exemplifies this change:

‘Among the many signs of progress and improvement…perhaps there is none more striking or more creditable to our humanity, than the change which has taken place in the manner in which the poor lunatics of our country are treated. Up to a few years ago, the law of treatment adopted …was one more of cruelty than kindness and the best means of cure were thought to be found in dark cells, handcuffs, solitary confinement, and frequent punishment….

But all that is changed now the lot of the lunatic though still a pitiable one is being alleviated in every possible way. Instead of being cursed or scolded, lunatics now hear kindly coaxing words and are spoken to with a remembrance that, though their minds have gone or are clouded, they are still human beings. The clunk of fetters has been superseded by the sound of the piano, and instead of the clunk of handcuffs, they hear the merry strains of the violin.

Flowers and flags and gay-hued bright lighted rooms have taken the place of the dark cells and the prison stocks. The dietary fare is good and abundant and were it not for the fact of their loss of reason many a man might be tempted to exclaim, ‘Who would not be a lunatic?”

Modern readers might be surprised at both the praise for the asylum and the lively tone of the piece. Nowadays asylums tend to be thought of as dark, dank, hellholes and the modern press rarely uses this jaunty language. The new asylum building and grounds were more reminiscent of a stately home, so clearly superior to the workhouses. It was a costly Bristol Corporation project, thus praising it would have generated civic pride, besides the previous establishments had a terrible reputation and were condemned in official reports.

The jaunty tone is a reflection of Victorian prose style but also shows the journalist’s amazement at the facilities and sensitivity to their plight. This is reflected in another asylum visit where the author uses poetry to show his realisation that despite the fine new asylum these people had real problems. 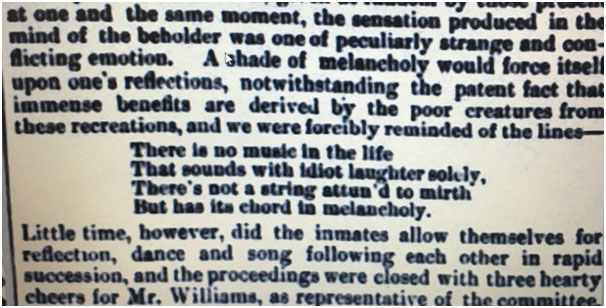 The various festivities at the asylum were often reported in the press and in glowing terms. Again from our modern perspective the writing appears patronising and the description of patient’s insensitive using the patient’s eccentricities and symptoms as amusing anecdotes for their readership. The following report from the Bristol Mercury, February 4, 1871, is fairly typical:

‘The annual ball given for the delectation of the unfortunate inmates of the Bristol Lunatic Asylum took place on Thursday. The male inmates have formed a brass band and their performance excited and astonished the visitors including many members of the Visiting Committee. Of the 243 inmates, 170 took part in the activities and there was not a single instance in which it was found necessary to withdraw a patient….. Amongst the inmates we have often noticed were Green, the scripture reader, who wishes to advertise for a solicitor to recover for him a bequest of £1000, Tustin the inventor who, after patenting inventions which brought him too much money for his brain to stand,  was obliged to seek the aid of the asylum, Bibby the jester, Lingard the graceful dancer and the lady with the dolls…….. the singing, the music, and the dancing were entered into with the greatest spirit and the festival was never more thoroughly enjoyed.’

Another example of using the patient’s behaviour as amusement for readers came from the Bristol Daily Press, August 17, 1863, where a woman ate a set of dominoes. The newspaper wrote that a powerful emetic was administered and 50 dominoes were recovered. They then stated ‘not withstanding this terrific meal we understand the woman is doing well’.

In the 1860s and 1870s, the new asylums and emphasis on ‘moral treatment’, where providing opportunities to lift patients’ spirits and encourage them to participate in life was considered an improvement to the old coercive ways in the treatment of the mentally unwell. The press reflected this optimism.

The positive stories did not last.  In the 1880s and 1890s, the newspapers rarely reported the fun at the annual balls although they still existed. The articles now tended to concentrate on reports of suicide, homicide or overcrowding. The following two items from the Western Daily Press and the Bristol Mercury are fairly typical. They report violent events that occurred at the asylum giving the impression that it was a dangerous place.

‘ALLEGED MANSLAUGHTER AT BRISTOL LUNATIC ASYLUM inquest was held yesterday before Dr. E. M. Grace, the coroner for the western division of Gloucestershire, the Lunatic Asylum, Stapleton, on the body of Charles Pauley, aged 43, an inmate the institution. The jury having viewed the body. Dr. George Thompson, medical superintendent to the institution, stated that the deceased was admitted to the asylum the 9th November last, and was professor of music, formerly residing at 9, Clifton Place, Clifton, but admitted to the asylum from the Barton Regis Union Workhouse. was reported to be “Epileptic and dangerous to others.”‘ Western Daily Press, Tuesday 4 December 1877.

‘SERIOUS CHARGE AGAINST AN ATTENDANT AT THE LUNATIC ASYLUM. Edmund Ironside Dann, a respectable looking young man. An attendant at the Bristol Lunatic Asylum was summoned for unlawfully striking and ill-treating Thomas Henry Carpty, an inmate confined in the asylum.’ Bristol Mercury, Friday 26 October 1883.

For the 15 years following the opening of the asylum, not a single patient committed suicide whilst many were characterised as being suicidal on admission. As an ex-hospital psychiatric nurse, I know this was a quite remarkable achievement. The hospital where I worked probably averaged 2-3 suicides per year. The first to successfully kill themselves was Mary Leworthy, admitted to the asylum on the 8th of August 1876 at 4.30 pm. The following day she hanged herself. An inquest followed which was reported in some detail in the local press; her story significant by the nature of her death. The following is an extract from the press reports, illustrating how the press report what is dramatic whilst people getting better is unlikely to make an exciting story. 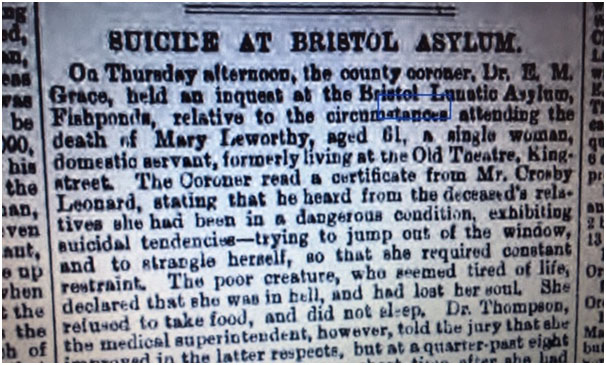 Thus stories of violence, ill-treatment, and suicide will have developed an impression that the asylums were dangerous places. Then there were other negative stories including the strikes by workmen and the attendants in (Western Daily Press, April 2, 1890), and of patients escaping from the asylum (The Bristol Mercury, November 12, 1881). The reporting did not blame the asylum authorities for the strikes or the escape but this era saw the return of reports questioning the costs of the asylum.

The Bristol Magpie advertised itself as the Bristol version of Punch, started in 1882, and had several pieces where the cost of the asylum was questioned, the following is from 1887.

‘I do not think that in connection with the very large and handsome structure devoted to lunatics, it is necessary to keep up such a large an estate, so much land, and such an elegant church. Why do not the people of Bristol economise a little more with the ratepayer’s money?’ The Bristol Magpie, October 29, 1887.

This mean-spirited response showed how asylums were beginning to be viewed not as a source of civic pride but rather a waste of money.

The changes in the press reporting of the Bristol asylum may have reflected a national sense of disappointment with county asylums.  Most being enlarged to keep up with the rising demand as more people moved to urban areas in search of work. Perhaps it also reflected a hardening of attitudes towards the insane influenced by the rise of the eugenics movement and the slow and not always successful results of ‘Moral Therapy’.