History portrays a neat progression from medieval and early modern supernatural belief toward the nineteenth-century science, secularisation and disenchantment, but is that a simplification?

To explore this question this blog series will examine the 168 male patients admitted to Bristol’s asylum between 1865 and 1890 because of their supernatural beliefs, with in-depth attention to fifteen case studies. In addition, the blogs will examine the extent that the doctors and the patient’s family regarded supernatural beliefs as abnormal and symbolic of insanity.

The blogs have examined the case notes at Bristol Archives.  Of the 168 male patients, 77% belonged to working-class occupations;  labourers (32), shoe-makers (17) and carpenters (9). Twenty-five were in commerce, including three accountants, two shopkeepers and three seamen. Eighteen were professionals, including clergymen Jubal Hodges and Michael Rowlandson and surgeon Philip Richards who believed the Devil tempted him, causing bladder inflammation.  In addition, 136 could read and write, 20 could read and eight were illiterate.

Supernatural beliefs are evident across all age ranges, from fifteen-year-old James Partridge to eighty-four-year-old John Wheeler. Partridge claimed he had been in heaven and Wheeler believed he completed God’s global chores. Table 1 provides a breakdown of specific beliefs that have been identified under the term ‘supernatural.’ 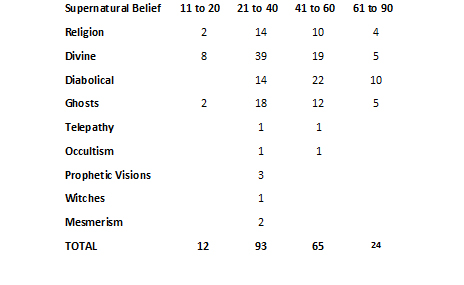 Table 1. Belief and Age of patient.

Religion: comprises of general religious references such as the Bible, saints andreaching. Religion was prominent for twenty-one to sixty-year-olds; John Foley saw the Virgin Mary and Samuel Budden fasted for three days due to Biblical law. Importantly, this confirms how nineteenth-century lay supernatural belief in Bristol was heavily religious. Reiterating this, patient Edward Ryall wrote:

‘I thank God that ever I enlisted into the Army of Christ where I know I am sure of getting a full reward. […] I find it is religion that so give sweetest pleasure while we live and I know it will be religion will supply solid comfort when we die.’

Divine: consists of the Holy Trinity, angels and heaven. According to age, divine belief was most frequent for believers under forty-one-years.

Occultism: the esoteric study of hidden knowledge and belief in invisible forces. Samuel Holman believed the Freemasons had afflicted him with syphilis whereas John Tovey, under Freemason influence, saw faces change. Both were admitted in the mid-1880s suggesting the elite occult revival filtered into popular culture.

Prophetic visions: possibly indicate that lay comprehensions of the universe and illness persisted and were not influenced by post-Enlightenment science. Albert Fry ‘Talked about storms, stars, predictions and other topics’, John Dewinthorne ‘could read the names in the book of life and could write a language unknown to anyone but a prophet’

Diabolical: encompasses the Devil and hell. Diabolical belief dominated, growing proportionally greater with age, perhaps due to anxieties of encroaching death. Charles Wescott ‘felt afraid that the Devil was going to snatch him away’ and William Harvey attempted to strangle himself because he saw the devil.

Witches: Lucas Smith maintained that three witches tried to enter his body and cause him harm.

Mesmerism: William Donne and Edward Ryall provide evidence of popular engagement with mesmerism, a movement which maintained that patients could be controlled by forces within the hands of a doctor. In 1881 Ryall asserted multiple persons exerted ‘mysterious influence upon him to […] cause him pains’ and Donne was admitted three years later believing the Prince of Wales mesmerised him. Supernatural belief resembling telepathy, the ability to communicate with your mind, features twice. In 1867 Jubal Hodges asserted an American clergyman appeared to him and in 1880 James Williams ‘could hear his mother swearing at him, though she was at the time not anywhere near.’

Across the twenty-five years diabolical belief remained constant, but religious, divine and ghost beliefs increased in the 1880s (Table 2). Whilst lay infiltration of culturally relevant beliefs such as occultism and mesmerism is becoming evident, overall supernatural beliefs persisted. Although there were the wider cultural and scientific changes which had instigated the provision of hospitals to support the mentally ill to become well, many political and lay circles still thought God was in charge and that illness was something that could only be cured by supernatural or God’s intervention. 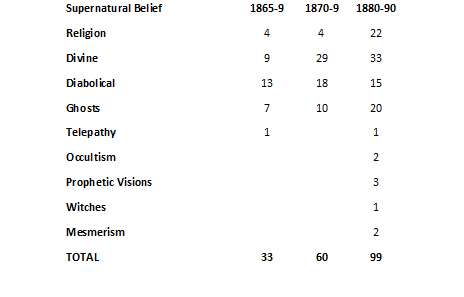 The increase in ghost references across this period challenges the traditional view that after the Reformation, popular belief in ghosts faded. In 1873 Arthur Coulstring believed spirits enveloped him, Richard Bending heard ‘his mother’s voice who is a spirit’, Robert Reeve asserted ‘a strange woman came out of the walls and stood by his bed’ and Charles Langdon saw ‘spirits and strange forms in his room at night.’ Interestingly, afterlife belief remained centred on heaven, hell and purgatory. In 1876 David Williams ‘saw the heavens opened, and his deceased mother appeared to him’ and Edward Dyer in 1882 believed that he was in heaven whilst everyone else burned in hell.

In terms of believer religious affiliation, Church of England dominated, followed by Dissenter, Established Church and Wesleyan. Given the breadth of religious backgrounds, evident in Bristol no link is found between religious affiliation and propensity toward supernatural belief as symbolic of madness (Table 3).  However, there are clear links between particular beliefs and a patient’s religious background, for example, Wesleyan preaching emphasised eternal damnation and Henry Snell believed he was going to hell and dragged his parents along with him. 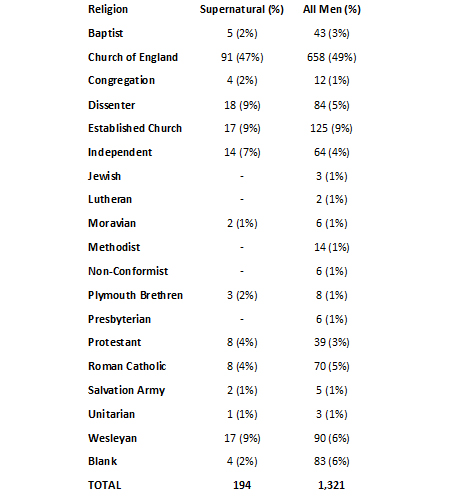 Table 3: Religion of the patients against those with supernatural beliefs.

The average believer stay was forty-three months with 35% (68) resident for over one year and 65% (126) up to twelve months. 19% (37) were patients for over three years, not dissimilar to all male patients at 22% (307). Just eighteen of 168 believers were resident for over ten years. Comparatively, believers were no more likely to remain long-term patients implying that believing in the supernatural alone did not deter discharge. Part three will examine the reasons for discharge in further depth.

In Part 2 of this Blog series, we will explore fifteen case studies in depth, with particular attention given to patients John Longman and Thomas Thurlow, before considering the importance of believing in the supernatural when it came to patient admission and diagnosis.