The Museum is situated in the church within the grounds of the old asylum which closed in 1994. The Museum provides an insight into the evolution of treatments for the 1 in 4 of us affected by mental health problems. Showing how mental health care has changed over the last 150 years.

Dennis Reed was an artist and patient at Glenside in the late 1950s. We have a significant collection of his beautiful drawings depicting patients going about their life in the hospital.

Glenside Hospital had some famous visitors including the film star Cary Grant, and Princess Anne.

‘One of the things I found strange, people that past us in the grounds had toothbrushes sticking out of their pockets where people normally had pens. The toothbrush was precious. It said something about how life must be organised. That it was so important to carry your toothbrush at all times.’ Glenside Hospital Museum Oral History Archive: Janet Shearer, visitor to Glenside Hospital in the 1970’s

Every item in our collection tells a story about life and the care provided at the hospital.

From 1809 Bristol Corporation had a duty to look after pauper lunatics. In 1845 the Lunatics Act made it mandatory. The Corporation were told they had to build a purpose built asylum. They were using St Peters Hospital in the centre of town but it was not fit for purpose and very overcrowded. 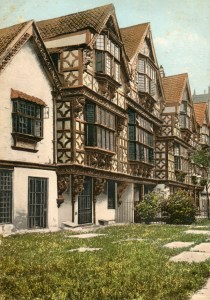 ‘St Peter’s Hospital, set apart for the Pauper Lunatics of the city, is without any dayroom, eating room or kitchen for the Females’ ‘the only place in which they (40 in number can take exercise is a small passage or paved yard at one end of the hospital. It is part of the road for carts to the workhouse and measures 37 feet by 18,’ It is ‘utterly unfit for an airing ground.’ Extract from report by Lunacy Commissioners 1844

Government stipulated that the new asylum had to be:

Bristol’s Lunatic Asylum opened in 1861. A great stone building with a large central house containing the administration, extending from which were many long, well-lit and airy wards. There was accommodation for staff, out buildings and all the land needed for a self-sufficient community. A farm with pigs, chickens and fields for vegetables. An orchard, large green houses and a team of gardeners. Apart the medical superintendent, nurses or male attendants, there were staff running the kitchen, laundry, and sewing room. There were butchers, bakers, painters and decorators, engineers, carpenters, and stonemasons. Like many large Victorian houses, it was brimming with activity.

The commissioners, who visited three weeks after the 120 mentally ill patient’s were transferred, stated they ‘could hardly recognise the patients before them as the same company they had been accustomed to seeing at St Peters Hospital.’
‘Each year brought more patients. In 1863, 18 epileptics were admitted and 20 patients ‘with the mental and corporeal decay of age, intemperance, pulmonary diseases and the exhaustion of approaching dissolution. Most were incredibly filthy, some suffered from contagious disease, consumption, old age, chronic cerebral disease, cancer and old injuries to the head. Year by year an estimate was made of those thought to be recoverable and it was less than half. So the asylum filled up until it had over 1250 patients.’