During the 1890s the asylum began to take photographs of the patients and place them in the case notes. Most have survived and I have now an archive of over 700 of these photographs which have been digitally restored. I have chosen the two photographs to discuss what they might tell us about the individuals and their lives in the asylum. Also, I think they are just great images that I would like people to see. In future blogs we will feature other photographs, with the ambition of making the whole archive available online. 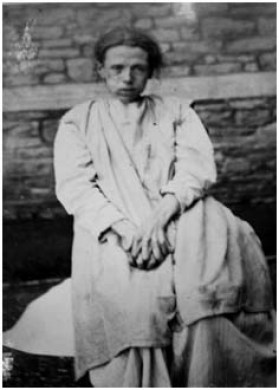 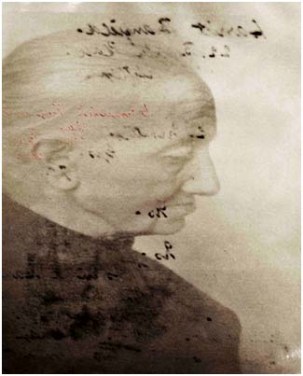 Both these pictures are evocative expressions of the sadness of many at the asylum. Having both biographical and medical knowledge of the sitter gives more meaning and poignancy to the image. We must also acknowledge that our previous knowledge of photography and of asylums influences how we interpret these images. A question that I grapple with is: are these photographs primarily historical evidence or are they art? Perhaps they are both but I would suggest that the first image has greater worth as evidence both of the individual and of the condition from which she suffered. The second image has considerable artistic merit but this comes from the fortuitous way in which the photograph was initially developed and the way it has aged. It does not really tell us anything about Harriet but I think it’s still a great image.

Until fairly recently there was an academic consensus formulated by writers such as Tagg that asylum photographs represented and expressed the control, surveillance and discipline that the asylums exercised on their patients.

Indeed, there was a great deal of control and many of the photographs in our archive are fairly uniform in terms of pose, attire and setting. More recent work has suggested that although there was control there were also elements of individuality and agency. These writers suggest that the personality of the subject and often their suffering does shine through. They are thus a useful addition to other evidence about the patients. Sidlauskas and Doyle have both suggested the elements of agency which can occur in such photographs.

The individuality of the patients is very apparent in viewing these photographs and to suggest that these patients were mere pawns of the system is to devalue them. Dolly Mackinnon and Catharine Cleborne in their recent book on the visual culture of psychiatry have concluded, ‘We contend that psychiatric practices, as well as those who have been made subject to its regimes, become more visible when we consider both the material and visual cultures produced through and by psychiatric institutions’. This contention is, I think, given greater credence by the above photographs.