“He makes the same mistake as the others when they look at a feeble-minded person and laugh because they don’t understand there are human feelings involved.” The words of Daniel Keyes’ protagonist, Charlie Gordon, in ‘Flowers for Algernon’. If you were required to read this classic story for your GCSE, you’d remember Charlie. Charlie was a 32-year-old man with an IQ of 68 who became a human guinea pig for brain surgery which increased his intelligence. Charlie describes himself as feeble-minded (or a moron), a classification which has its basis in the Mental Deficiency Act of 1913.

An excerpt from the Act is pictured below and is on exhibition at the Museum. 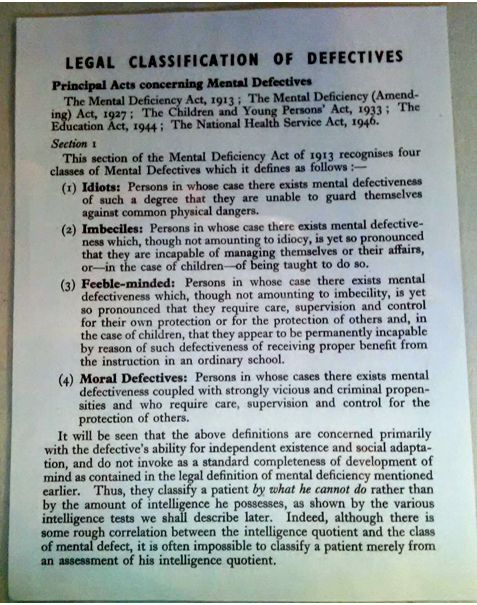 According to Wikipedia, the word ‘moron’ was coined in 1910 by United States psychologist Henry H. Goddard. It comes from the Ancient Greek word moros, which meant ‘dull’. It was once applied to people with an IQ of 51–70 but has since taken on a derogatory meaning. When you Google the word ‘moron’ the definition comes up as a stupid person and, unless you dig further, there is little indication of the weight that word carries. In the USA in the early 20th century to be classed as feeble-minded could put you at risk of sterilisation.  Henry H Goddard (yes, he who coined the word moron) used this intelligence classification to justify the sterilisation and deportation of vulnerable people with mental deficiencies.

The second definition classes moron as offensive, even if old-fashioned. So why do we continue to use it in casual everyday speech? We use it to insult someone who we feel lacks knowledge, and therefore intelligence. We continue to use this word pejoratively when more appropriate and, frankly, imaginative language can be used.

In ‘Flowers for Algernon’ there is a tense confrontation at a cocktail party where the doctors who were responsible for giving Charlie increased intelligence rail at him for his rude behaviour towards their funders. Dr Nemur believes that his “genius has destroyed your faith in the world and in your fellow men”.  To which Charlie replies:

“But I’ve learned that intelligence alone doesn’t mean a damned thing. Here in your university, intelligence, education, knowledge, have all become great idols. But I know now there’s one thing you’ve all overlooked: intelligence and education that hasn’t been tempered by human affection isn’t worth a damn…”

Look out for the next blog post by Jill Achineku.