Bristol Lunatic Asylum took leisure activities for patients seriously. It was seen as part of supporting the patients to regain their health. They had a small library and organised a number of sports activities including cricket. Each week they had a concert which most of the patients attended. In 1864 bagatelle boards and a skittle alley were provided, billiards was introduced in 1884, croquet in 1892, and bowls in 1896.

And there was the annual ball to which visitors including the local press were invited, the quote below being from the Bristol Mercury, February 4th 1871.

‘The annual ball given for the delectation of the unfortunate inmates of the Bristol Lunatic  Asylum took place on Thursday. The male inmates have formed a brass band and their performance excited and astonished the visitors including many members of the Visiting Committee. Of the 243 inmates 170 took part in the activities and there was not a single instance in which it was found necessary to withdraw a patient….. Amongst the inmates we have often noticed were Green, the scripture reader, who wishes to advertise for a solicitor to recover for him a bequest of £1000, Tustin the inventor who, after patenting inventions which brought him too much money for his brain to stand,   was obliged to seek the aid of the asylum, Bibby the jester, Lingard the graceful dancer and the lady with the dolls…….. the singing, the music and the dancing were entered into with the greatest spirit and the festival was never more thoroughly enjoyed.’

Brass bands have their roots in the working class, and grew out of the industrial revolution at the turn of the 1800s. Many places of work, where there were enough male employees, would sponsor a brass band.  Today in Great Britain there are thousands of bands with many of them having origins prior to 1900.

In the two illustrations of Asylum balls below, the participants do appear for the most part to be enjoying themselves. One illustration shows a ball at a Somerset Asylum and is a fairly small affair. The other illustration is of Colney Hatch, which was a very large asylum, and shows a large crowd of people. 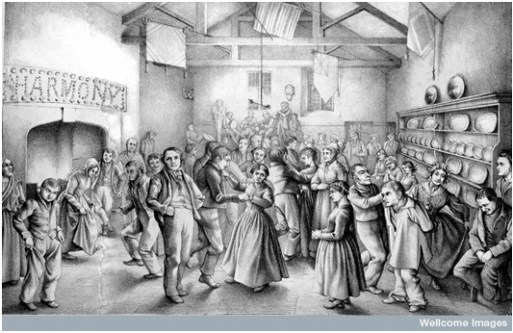 Patients dancing at a ball at Somerset County Asylum

Process print after a lithograph by K. Drake, Welcome Images 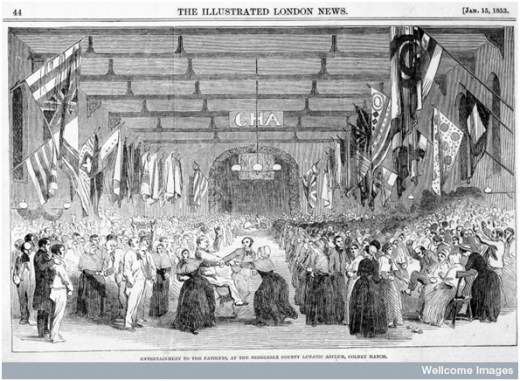