Arthur Nichols is an interesting character. He spent roughly five years at the asylum before being transferred to the Hanwell Asylum in London. The Bristol Lunatic Asylum’s notes on him as a patient, held at Bristol Records Office, include several letters from him to various friends and family, providing us with an insight into him as well as the asylum.

Nichols was not a typical patient; he came from a middle-class background, and was a professional artist. However, he was admitted to the asylum as a pauper patient, so he cannot have made much money from his art. His allusions in the letters to art and literature show a depth of education (BRO 40513/2/7, p. 33).  In the letters he details his artistic endeavours, which appear to have occupied most of his time. He seems to have been given a fair amount of latitude to do this and painted portraits of members of staff and other patients.

Below is a picture he did for the Superintendent in 1885. 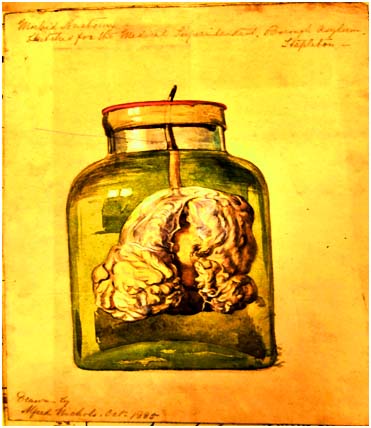 The nature of the body part mentioned in the title is unknown – any suggestions will be gratefully received.

Nichols writes about many topics in his letters. They indicate he enjoyed the weekly concert: ‘Last night a handsome girl played a long and difficult fantasia in the ballroom in a brilliant style. Then the young Indian soldier volunteered a song accompanied by me.’ (Admission book BRO 40513/C/2/7, p. 33, undated letter probably 1884–5).

This gives us a somewhat different picture of life in the asylum contrary to the popular idea of tormented souls in terrible conditions. He was diagnosed as suffering from delusional insanity, though his letters on the surface display only occasional glimpses of mental problems.

His diary notes in the letter to his mother show a preoccupation with his physical health. They also give us an insight into his daily routine from walking in the courtyard, music, short observations on other people in the asylum, as well as what he ate.See letter and transcript below. 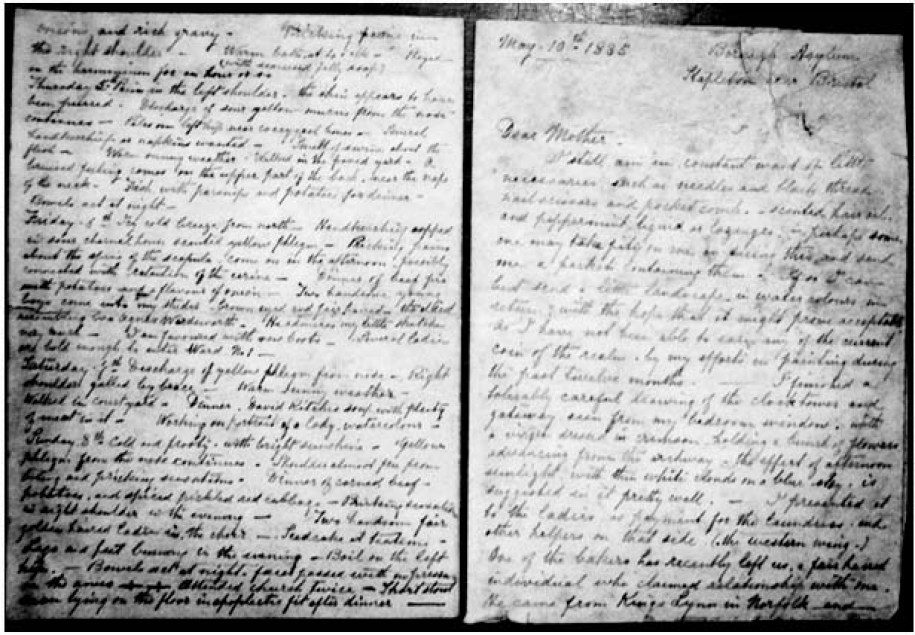 I still am in constant wait of little necessities such as needles and black thread, nail scissors and pocket comb, scented hair oil, and peppermint liquid as lozenges – perhaps someone may take pity on me in doing this and send me a packet containing them. If so I can but send a little landscape watercolour in return: with the hope it might prove acceptable as I have not been able to earn any of the current coin of the realm by my efforts in painting during the past twelve months.

I finished a tolerably careful drawing of the clock-tower and gateway seen from my bedroom window, with a virgin dressed in crimson, holding a bunch of flowers advancing from the archway – the effect of afternoon sunlight with the white clouds in a blue sky is suggested in it pretty well – I presented it to the ladies as payment for the laundress and other helpers on that side (the western wing). One of the bakers has recently left us, a fair haired individual who claimed relationship with me. He came from Kings Lynn, Norfolk and …’

[left page]  ‘…onions and rich gravy. Pricking pains in right shoulder. Warm bath at 4 o’clock (with seaweed jelly soap). Played on harmonium for an hour or so.

Pain in the left shoulder, the skin appears to have been pressed. Discharge of sour yellow mucus from the nose continues. Piles on left hip near coccygeal bones. Several handkerchiefs as napkins wanted. Smell of urine about the flesh. Warm sunny weather. Walked in paved yard. A bruised feeling comes from the upper part of the back, near the nape of the neck. Fish with parsnip and potatoes for dinner. Bowels act at night.

Icy cold breeze from north. Handkerchief applied in some charmed house scented yellow phlegm. Pricking pains about the spine of the scapula came on in the afternoon possibly connected with retention of the urine. Dinner of beef pie with potatoes and a flavour of onion. Two handsome young boys came into my study, brown eyed and fair haired the other resembling Eva Agnes Wordsworth. He admires my little sketches very much. I am favoured with new boots. Several ladies are bold enough to enter Ward No.1.

Discharge of yellow phlegm from nose. Right shoulder galled by brace. Warm sunny weather. Walked in courtyard. Dinner. David Ritchi’s soup, with plenty of meat in it. Working on portrait of a lady, watercolours.

Cold and frosty with bright sunshine. Yellow phlegm from the nose continues. Shoulder almost free from pain and pricking sensations. Dinner of corned beef, potatoes and spiced pickled red cabbage. Prickling sensation in right shoulder in the evening. Two handsome fair golden haired ladies in the choir. Seedcake at teatime. Legs and feet [ ] in the evening. Boil on left hip. Bowels act at night, faeces passed with no pressure on the anus. Attended church twice. Short stout man lying on floor in apoplectic fit after dinner.’