Another ‘idiot’ is in the news. Last month a man wearing a fake suicide belt hijacked a plane flying from Alexandria to Cairo. Seif Eldin Mustafa wanted to see his ex-wife and so he forced the pilot to fly to Cyprus where she lived. After his arrest, a spokesman for the Egyptian Foreign Ministry was quoted as saying, “He’s not a terrorist; he’s an idiot.” And I agreed. Who, instead of just buying a ticket, hijacks a plane? Mr Mustafa was an idiot, wasn’t he?

According to the Collins English Dictionary, the word originates from both the Latin word idiōta, meaning ignorant person, and from the Greek word idiōtēs, a private person or one who lacks professional knowledge. This was circa 1250, and over the centuries the word has taken on various meanings. The modern day definition — a foolish or senseless person — is close to its Latin origins. However, along the way, the word ‘idiot’ was used as a classification in the 1913 Mental Deficiency Act.

An Exhibit at Glenside Hospital Museum 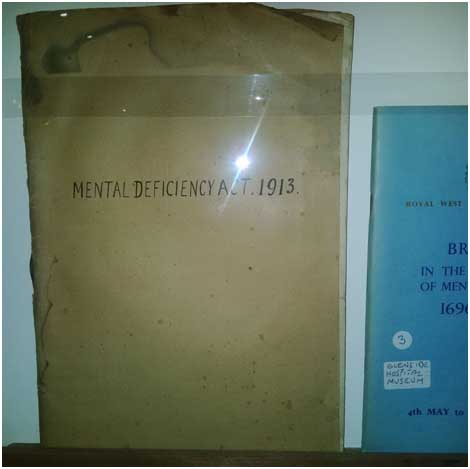 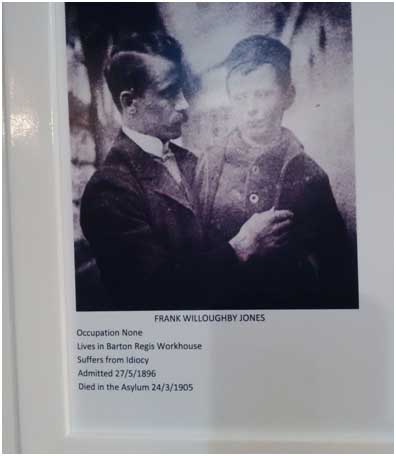 Here, idiots were ‘persons in whose case there exists mental defectiveness of such a degree that they are unable to guard themselves against common physical dangers.’ These days, people in this category of mental disability are said to have profound intellectual disability.

From Paul Tobia’s wide and well-researched exhibition of patients at Bristol’s Lunatic Asylum (1861–1900) at The Glenside Hospital Museum, we are able to see that some residents, like Frank Willoughby Jones (the child pictured below), were classified as Idiots and eventually died whilst living in the asylum.

The use of the word idiot is so prevalent in our society that a cursory look quickly throws up a few media examples. Ricky Gervais produced ‘An Idiot Abroad’, for instance, a travel documentary about a man with no interest in travel. There are ‘The Complete Idiot’s Guides’,  a series of how-to books where a topic is explained in simple terms for easy comprehension. These titles derive their meaning from the original definition.

Using the word idiot is one that I find difficult to let go. Not in a Charlton Heston “from my cold dead hands” way, but in that it is my go-to word when someone’s behaviour or reasoning defies my sphere of logic. But am I being lazy, reaching for the low-hanging fruit, when I could think of the behaviour and name the behaviour precisely? This would help me think about a person’s actions instead of an easy dismissal. Especially because the word which is used as a dismissal is one which is also used to insult those who need our help the most. It is difficult to hear people with Down Syndrome being referred to as idiots as this video shows: https://www.youtube.com/watch?v=QLFbzd73w7I&feature=youtu.be&t=4m

So was Mr Mustafa an idiot? Later it would emerge, through various news reports, that he was mentally disturbed. I would say he just needed our help.