In a tucked-away corner of the museum, I discover a collection of coins and immediately wonder why they were there and what they were used for. A small typed note nearby explains that this was ‘hospital money’ given to patients to spend in the shop. Volunteers on hand explain that the money was earned by patients who worked in the hospital – f 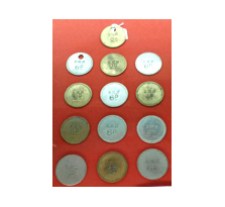 or example in the sewing room, laundry or in the gardens. Some recalled the tokens being in use in the 1950s and that the patients mostly spent them on cigarettes.

In his history of Glenside Hospital, Dr Donal Early (1917-2004), writes about the introduction of a ‘tally system’ in 1926 which replaced the practice of rewarding working patients with tobacco or other goods:

In 1928 this was reported to be working well with 190 men and 150 women “paid” with tokens of 6d, 4d, 3d, 1½d and 1d which could be exchanged in the canteen for articles of one’s own choice. Thus it was hoped that more men and women would be persuaded to occupy themselves usefully.

Curious to know more about what patients spent their money on, I took a trip to Bristol Records Office. I looked at the hospital shop receipts and stock book from the 1950s. The receipt book was not easy to understand and mostly gave summary information, however, some loose-leaf hand-written slips attached by paper clips to the front of the book shed some light. Stock items listed were:

The two largest value items – by a long way – were tobacco and cigarettes and confectionary. These would therefore have been consumed in considerable quantities by both patients and staff. 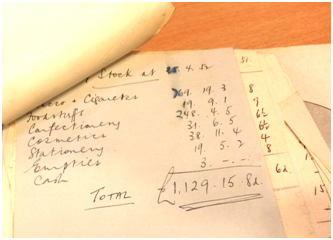 My searches into mental hospitals revealed a sometimes contentious history in the use of tally or token systems. In some instances, it appears to have been used to modify behaviour – that is to get patients to do what staff wanted. In others, it appears to have been used as a genuine payment in recognition of labour. It’s hard to know what patients’ views were. At Glenside it is clear that it was intended to encourage patients to do useful work, which was believed to have therapeutic value.

Finally, the title of this post is taken from an article written by a female patient in ‘The Nail’, the hospital’s magazine in the 1950s. She used this phrase to describe what she felt about attending a social club, which she enjoyed, away from the ward. I have used it here because I imagine that, for some patients at least, earning and paying for goods of their choice along with staff and visitors might also have had ‘a touch of the outside world’ about it.

You may be interested in reading other blog posts in this series. I would love to hear what you think.

You may also be interested in blogs written by Paul Tobia. His blogs focus on patients’ stories.

Artists in residence at the museum, Alldaybreakfast, are researching the archive and making art works in response to the objects in the museum:  www.alldaybreakfast.info.

There are lots of different things for volunteers to do at the museum. If you would like to get involved, see the information for volunteers on the museum website or use the online contact form.