Helen Bolton continues her journey round the museum.

The object – or objects – that first caught my eye when I stepped into the museum were two sets of fairly ordinary looking keys. One was draped casually over a mug commemorating Stoke Park (a hospital for people with learning disabilities and sister institution to Glenside that sits on the other side of the M32), the other lying nearby as if someone had left it there momentarily and then forgotten to come back for it.

They reminded me of objects I might have found in my granny’s house many years ago. All those keys to doors or locks that had been left in drawers or on windowsills and mantelpieces, with no-one ever quite able to remember what they were for. They were familiar, obvious, domestic but, in this instance, someone had chosen to put them there. They were there as symbols. They were there in context. They were there definitely to mean something and, at that moment, they were the most powerful objects to greet me.

Not only were they a reminder that I was stepping into another world, they were a signal that what lay beyond was a history waiting to be unlocked, a history that promised to be both strangely domestic but also carefully guarded and controlled. One where lives were lived under supervision and, for some, quite literally, under lock and key.

As I made my way round the 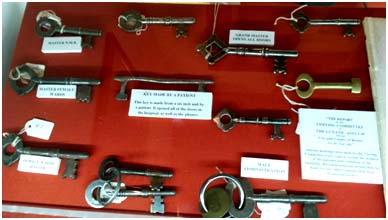 museum, I discovered more keys and a variety of locks. There is a seal press that has two locks on it. Two people had to be present to unlock it when it was used as a means of formally authenticating documents, certificates or letters issued from the hospital. There are keys for male wards, female wards, keys on chains and a large ‘grand master’ key. Most interesting of all, there is a crudely worked master key said to be fashioned from a nail by a patient, apparently in secret, and presumably confiscated at some point, though it is not clear if it was ever successfully used.

The locking up of people and things, such as drugs and sharp objects, that might enable patients to harm themselves or others has long been a feature of the treatment of people with mental illness. There is an entry in the 1885 edition of the Handbook for Attendants on the Insane, a copy of which is held in the museum, which says:

Keys should never be left in the lock or lying about, and the loss of one should be reported immediately.

In the 1950s, though some patients were still contained in locked wards, there were opportunities for occupation. At Glenside, former staff member Bryan recalls that:

Many patients left their ward during the day to work in various hospital departments like gardens and laundry or to attend occupational therapy. Many were allowed to leave the ward to attend specific activities such as church services, dances and cinema shows, or to watch cricket or football. This was done under supervision.

The need for security, particularly to ensure patient safety, continued after the passing of the Mental Health Act (1959), which ‘encouraged the development of community care‘. Ann, who worked at Glenside in the 1980s recalls:

You used to collect keys at reception. Each key had to be signed in and signed out. Keys were never lost. All the wards had locks. The pharmacy was locked. Even the toilets were locked. In the early days, the keys [to the toilets] were large and heavy but then they changed the locks and smaller keys were used. There were hundreds of keys.

Perhaps most poignant are the recollections of Ian Rogers, a painter and decorator at Glenside during the 70s and 80s, who captures what happened both at the end of his time working there and following the closure of the hospital in 1994:

It was weird handing your keys back in after carrying around these big heavy keys in your pocket for 20 years, your pockets never felt so light.

… The sad thing was, though, when it changed to the uni and they got rid of the patients, they’d still come back here, you know, and I think it’s sad for them as they spent their lives there.

This is my second blog following on from my first blog. When all the blog posts are published, they will read like an object guide blog-trail. I would love to hear what you think.

You may also be interested in blogs written by Paul Tobia and Jill Achineku. Paul’s blogs focus on patients’ stories and Jill’s on the language used to describe mental illness and how its meanings have changed over time.

There are lots of different things for volunteers to do at the museum. If you would like to get involved, see the information for volunteers on the museum website or use the online contact form.  .