The asylum admission books record many tragic stories but the most heartrending were of children admitted to the asylum. There were not many; 96 or 1.8% of the admissions between 1861–1900 were children aged 16 or under and of these only ten were under 11. The youngest was Rosina Smith who was admitted aged just six.

In the nineteenth century there was no age limit on admissions to asylums and no specialist children’s services. Child psychiatry did not exist and was many decades away from its inception.

For a fuller account of this issue see Kate Gingell,

‘The forgotten children: children admitted to a county asylum between 1854 and 1900’

Melling, Adair and Forsythe have shown how the admission process for children involved an extensive series of negotiations between the family, poor law officials and the asylum. They also asserted that families only put their children into an asylum when they were suffering from very severe behavioural or cognitive disorders. This also seems to have been the case at the Bristol Asylum.

As I researched these children it became obvious there was not a single narrative which describes their experiences. I have divided the blog into three parts to talk about these children:

Blog 1: Young children in the Asylum, introduction and admissions of children aged ten and under. Illustrated by the experience of Frank Willoughby Jones and Frank Wyatt.

Blog 2: Older children in the Asylum, admissions of children aged 11 to 16. Illustrated by the experience of Elizabeth Nelmes and Lewis Bullock.

Blog 3: More children in an Asylum, forgotten pasts: the experiences of a further four children admitted to Bristol’s asylum.

Admissions of children aged ten and under

The ten children form a sadly homogenous group, united not just by age but also by the nature of their problems. In diagnostic terms they were all labelled as idiots, though we must remember Victorian diagnostic terms were often little better than arbitrary. Of these only one is termed as having recovered but he was readmitted two years later and died in the asylum; we will return to his story.

Of the ten children, seven were admitted between the years 1878 and 1883 but without further research it is not clear why this cluster of admissions occurred. Four out five children suffered from severe forms of epilepsy. Two had what was termed ‘congenital problems’. They all were described as having severe behavioural problems and despite their age were often classed as ‘dangerous’. None seemed to have what we consider mental illness. 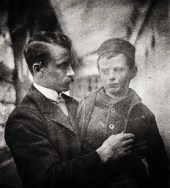 Frank Willoughby Jones, was eight years old when he was admitted on May 27th 1896. He came from the Barton Regis Workhouse and little is known of his family background. From a very young age he had suffered from epilepsy and was classed as a ‘congenital idiot’, probably due to brain damage brought about by his fits.

The photograph of Frank Willoughby Jones, taken at the asylum shows him being held for the photographer.

For further information on this diagnosis:

He was very aggressive and the workhouse could not control him. He bit people who came near him. The asylum tried to help; he was taught to feed himself but his fits were often described as ‘very strong’. He survived until his death in 1905 aged 17, a short and sad life (Admission book BRO 40513/C/2/11, 14).

Another ten-year-old child admitted to the asylum was Frank Wyatt. He was discharged from the asylum as ‘recovered’ in 1877, but was readmitted three years later (Admission book BRO 40513/C/2/5, 132). He was diagnosed as a ‘congenital idiot’, an unpleasant term to our ears but one which was considered a legal medical term at the time.

He was obviously often quite disturbed and presented the asylum with severe behavioural problems. In August 1883, he ‘put his head through two panes of glass’ and in April 1885, he ‘tore down a gas pipe during the night, bit his gloves to pieces and tore his bed up’ (Admission book BRO 40513/C/2/6, 72). These were not isolated incidents and he had to ‘be constantly watched or he will do some mischief’. He was regularly given sedatives such as hyoscine to calm him down.

This is the first part of three about Children in the Asylum by Paul Tobia.

Part 2 and Park 3 links are below: