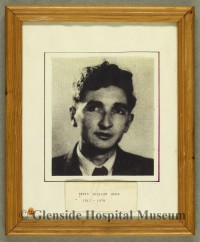 Glenside Hospital Museum has a collection of some 80 drawings and sketches by Denis Reed. He was a patient at Glenside Hospital in the 1950’s. He suffered from bouts of severe depression. The drawings are beautifully executed and provide us with a poignant record of life in the hospital.

In 1934, Denis studied Drawing and Pictorial Design for four years at the Royal West of England Academy (RWA).  He was then awarded a grant to study in London at the Royal College of Art in London (RCA), starting his course in 1938.  His studies were interrupted by war and he joined the army. Due to ill health following a major kidney operation he had had in 1938, he was deemed as unfit for overseas service and was allocated duties at home, including art advisor to the London district of Army Education.

He completed his course at the Royal Academy in 1948, obtaining a distinction.  He obtained as Senior Lecturer in painting at Loughborough College of Art. However shortly after taking up the appointment, he suffered from a bout of ill health and was forced to abandon his teaching career. He returned to Bristol and over his lifetime painted some 250 or more oil painting, as well as watercolours and sketches. He continued to have bouts of ill health from time to time.