In 1948, when the NHS took over the management from the local Council, there were over 1,200 beds. Although the cure rate had been good, the hospital was blighted in its ability to care for patients by overcrowding. Long stay patients accumulated until the introduction of psychotropic and antidepressant drugs in the 1950s but even then, the number of people needing beds continued to rise. In 1951, a reduction in beds to 872 was recommended but not implemented. In-patient costs were cut to the bone as numbers continued to rise.

In addition, the building was in need of modernisation; sanitary and toilet facilities were inadequate.  A fire in the central kitchen and dining room gave rise to some improvements to the catering including heated trolleys, and refrigerators in the ward kitchens. The large bare refectory tables were replaced by small tables for four. The milky, sugared tea from an urn was replaced by teapots, with sugar bowls and milk jugs.  There were other improvements including a more consistent water supply, which meant communal bathing ceased, immediately reducing the number of skin infection.

Did You Know: the hospital has its own underground reservoir in the grounds, which provided all the water for the hospital until the 1950’s.

Did You Know: Barrow Hospital built to alleviate overcrowding at Bristol Mental Hospital opened in 1939, but no sooner had the 300 patients been transferred they were back. Barrow Hospital was taken over as a Navel War Hospital and did not open for civilian patients until 1947. It finally closed in 2006.

With better drugs and the rise in the patients’ rights, it was possible to envisage people managing their illness from home. The movement away from isolating the mentally ill in large institutions set apart from urban centres started with the 1959 Mental Health Act. The Act abolished the distinction between psychiatric and other hospitals and encouraged the development of community care. The phrase ‘community care’ describes the various services available to help people manage their physical and mental health problems in the community.

In 1961, the health minister Enoch Powell proposed that mental hospital beds be reduced by 40% over the next 10 years.  While health professionals agreed that large hospitals were not the best way to care for patients with mental illness, they were also aware that there was not enough appropriate accommodation or staff to provide support out in the community so the transfer was a slow process.

A 1960’s survey of the 1012 Glenside Hospital patients found 37% nolonger needed hospital care but they could not or did not actively seek to live outside the hospital.  This proportion continued over the next 30 years, though the population slowly declined by 2.4% every year as they were relocated to care homes or death. By 1990, there were just 294 patients left, over half of whom were over 65 years old.  In 1994 the Glenside Hospital finally closed.

When the hospital was run as a self-sufficient community, patients worked within the hospital but after the NHS took over things began to change and patients were often left with nothing constructive to do. A Bristol science pioneer Dr. Donal Early in 1957 enlisted the help of a local businessman who relied on out-workers to assemble ball-point pens. This was the start of ITO. By the end of 1958, one-third of the patients (380) were doing paid work as part of their therapy. ITO ran successfully for several decades.

After patients started working for ITO an ‘immediate change in the patients was visible, and socialising was more cordial.’ Dr Donal Early. Consultant Psychiatrist at Glenside Hospital, author of The Lunatic Pauper Palace, documenting the history of Glenside Hospital Bristol from 1861 to 1994.

Denis Reed was a patient three years in the early 50s and as a practicing artist has left us with a collection of 83 drawings. See gallery and further information about him and our collection in the review of our Museum Assscan now offer a touring exhibition and drawing workshops to other museums and venues. If you would like to talk about booking an event please contact Stella Man, glenside_museum@hotmail.com

DRAWING WORKSHOPS: people from Bristol and further afield – as far as Australia – have participated in workshops to learn his drawing techniques.  For groups of 10-20 people, you can book a one-hour for £10 per person or three-hour sessions at £20 per person. The workshops can be delivered anywhere including at the Museum.

HANDLING COLLECTION WORKSHOPS: these support people to debate the medical care provided in the past for people with mental illness. It is an opportunity to unpack our prejudices and consider our well-being by examining closely items from our collection. The workshops are tailored to suit the audience. Staff development days for mental health practitioners, or tutors, developing an understanding of the issues for students, or entertaining people with dementia, older people in residential homes. We charge £55 per workshop plus travel.

POP-UP EXHIBITION: our touring exhibition can be designed to fit every occasion. Over 500 people from the 3000 that visited the Bristol NeuroScience Festival were engaged in conversation.

We have a portable Denis Reed exhibition on freestanding boards 2m x 2m and information on flexible banners, which are used in conjunction with our handling collection to support people to consider mental health care. Over 1000 people came to a special two week exhibition in the city centre Vestibules Gallery in May 2018 and a smaller version of the exhibition was put up for the University of England’s 70thNHS birthday event.

Excepts from the interpretation banners below: 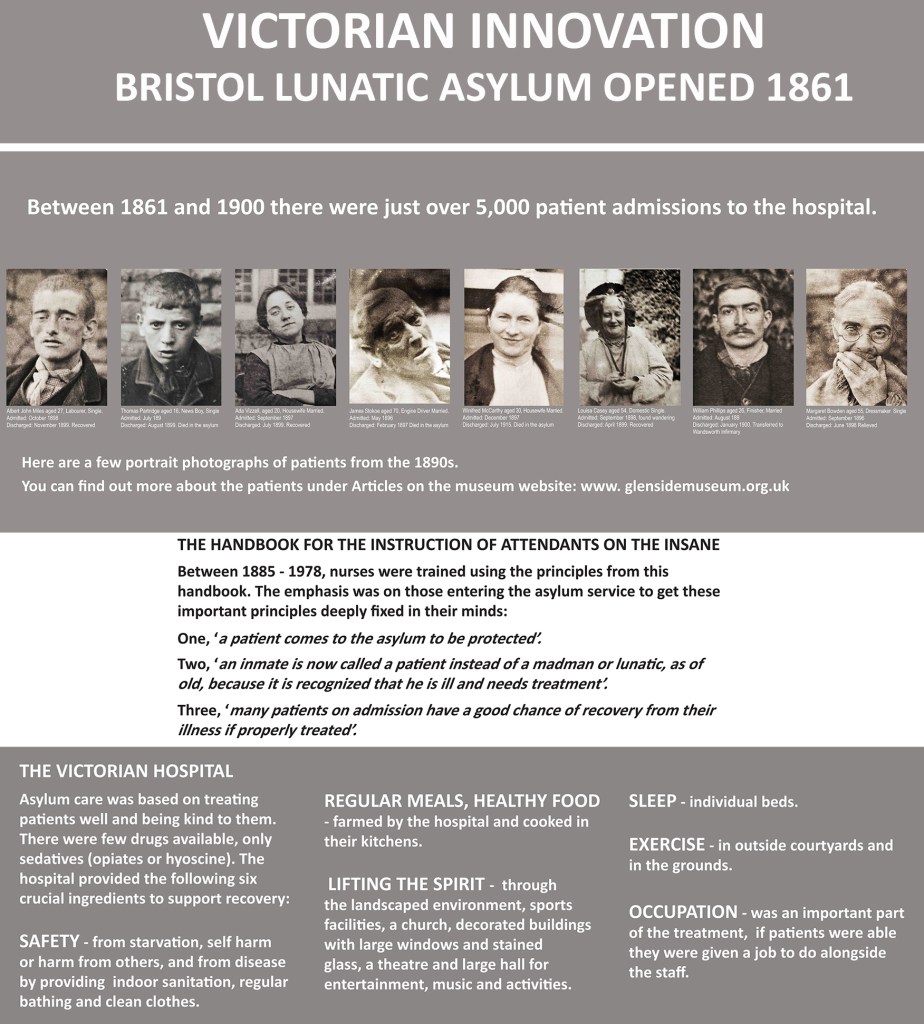 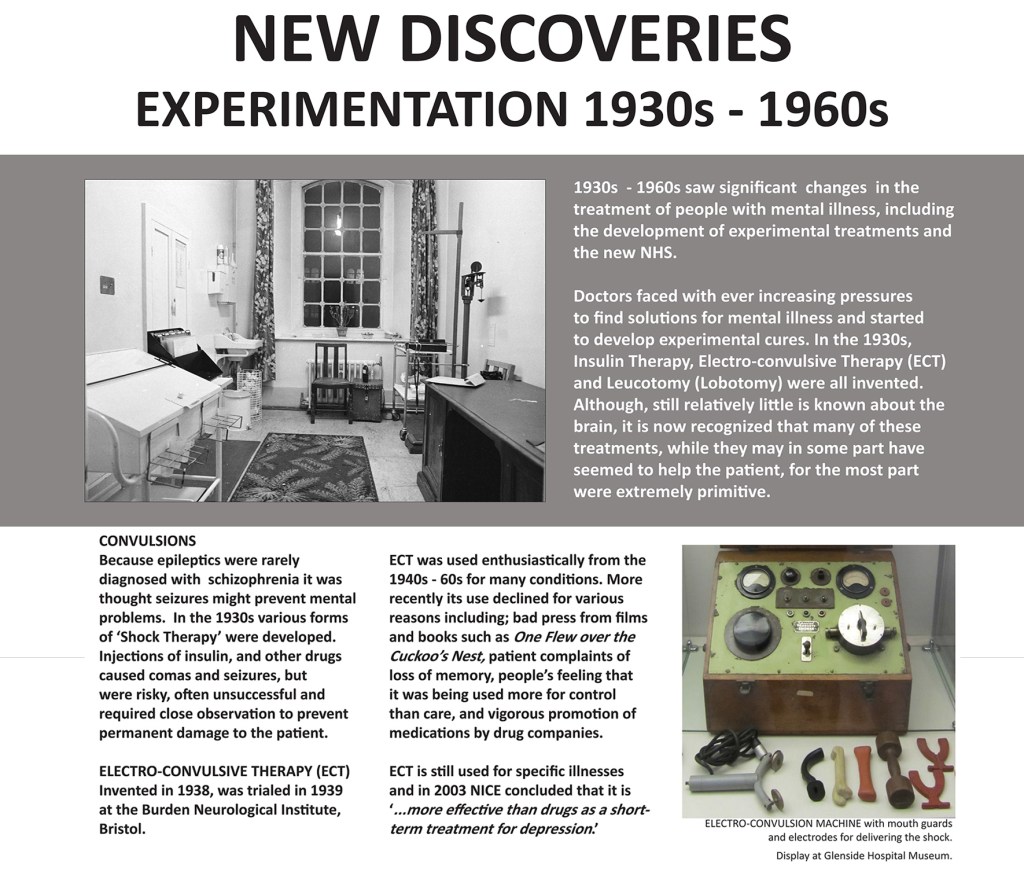 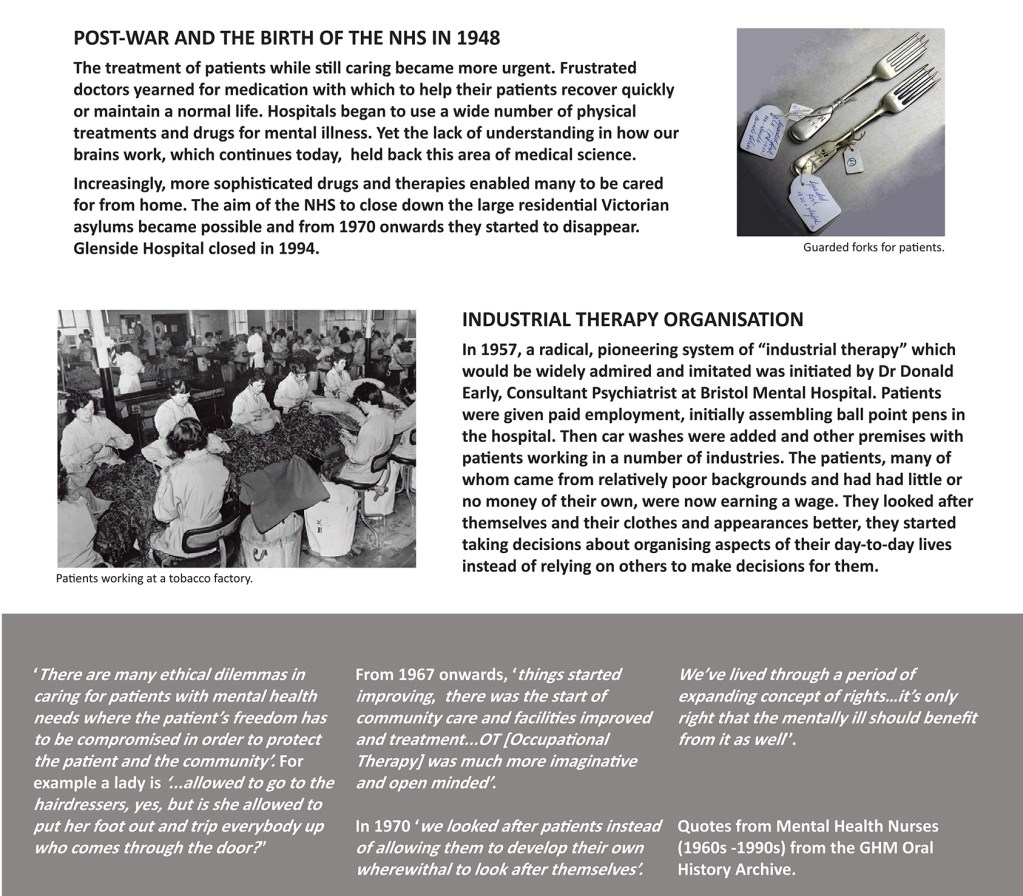