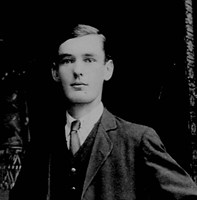 At the beginning of our project, while assessing the Beaufort Archive at The Glenside Hospital Museum, we found a copy of John Mulholland’s Medical Report. He was  at Beaufort in 1917. We have matched this report with his Service Record.

Private John Mullholland came from Belfast and enlisted in The Royal Irish Rifles on 16th September 1914, aged 22. His partially preserved Service Record doesn’t tell us much about his war except that he was fighting in France.

The Medical Report however gives us a lot of information about why he was sent to Beaufort and eventually discharged from the army as unfit for War Service.

‘About August 13th (1917) had an attack of influenza, laryngitis and sore throat. Since then has been very short of breath, had a hard troublesome cough and palpitations, in bed most of the time, never had rheumatism.’

The cause of his illness is listed as ‘exposure’ which gives us an insight into the harsh conditions in the trenches. Many soldiers became seriously ill from infections, influenza, and rheumatism. John Mulholland spent 44 days at Beaufort, admitted on 30th August 1917, and discharged on the 12th October. His illness was evidently severe, he was recorded as having heart palpitations; the cause of his discharge is listed as Aortic Regurgitation.