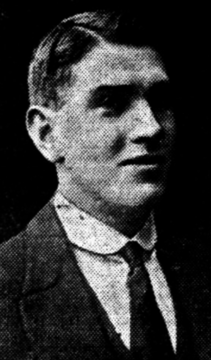 Royal Edward Penna’s family were from Cornwall. His grandfather emigrated to Australia in about 1860. Penna was a shoesmith by trade, and he joined The Australian Imperial Force (AIF) on 5th August 1915, at the age of 21.
On the night of the 4th August in an assault on the German trenches, he was hit by gunfire in the hand, arm, groin and leg. He was invalided first to Rouen and then to Bristol. He arrived at The Beaufort on 10th August 1916. Private Penna died on the 4th of September 1916, the cause of death listed as – Gunshot wound left hip, Septic Arthritis, Exhaustion. He is buried in Soldiers Corner, Arnos Vale Cemetery, Bristol, grave number 731.
As well as his Service Record, we also have documents from the Australian Red Cross which include a very moving letter from Matron Kate Underwood, to Penna’s sister. His family had requested any information regarding his death, and her thoughtful reply must have given them some comfort:
“Private Penna was a man of whom we were all fond, such a nice man, and the sister could not have done more for him had she been his mother. He was delirious for quite three weeks before he died, and he had a special night nurse for a long time. There were a great many Australians in the same ward who paid him every respect and kindness, and there was one orderly in particular, whom poor Penna always called for. He was present with him when he died as of course were Sister and Nurse.”
The sad short list of his final effects include
1 set of artificial teeth
1 postcard (hospital photo)
1 small bag (which contained a periscope, a torch and a fly net)