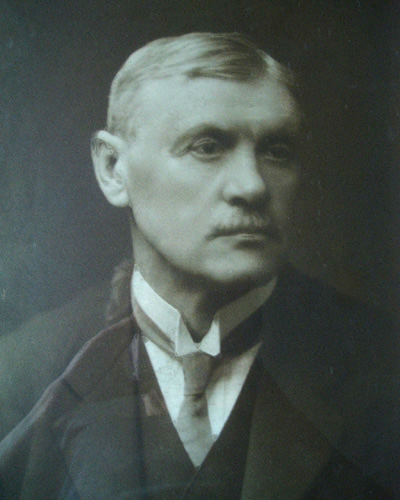 James Vincent Blachford (M.B, B.S. LRCP MCP), was born in Staffordshire in 1866. He went to school at Dulwich College and completed his medical training in Durham. In 1891he was working as a Medical Officer at the Lambeth Infirmary in London and became a Member of the Medical-Psychological Association in 1894. By 1901 he was Assistant Medical Superintendent at the Bristol Lunatic Asylum. When the Asylum became the Beaufort Military Hospital, Blachford was promoted to Lieutenant Colonel in the Royal Army Medical Corps. He was awarded the CBE for services in connection with the war on the 12th December 1919. He married twice and retired to Long Ashton in Bristol, where he died on the 11th November 1957.
As well his medical duties, James Blachford is frequently mentioned in the Western Daily Press as meeting and greeting the classical and musical hall artistes who came to play and perform at the concert hall in the hospital. He is also remembered as being a collector of moths and butterflies, going out into the hospital grounds at night to catch them.